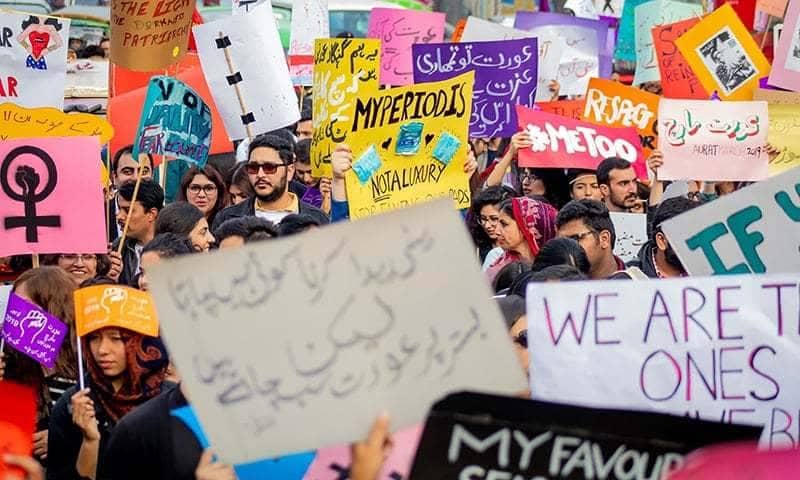 Feminism, a term that has a profound ideology of “equality” behind it. Feminism connotes equality for all genders, but in Pakistan, this expression is widely misinterpreted. On account of a misconceived idea, the feminism has emerged a movement against the gender of men, a wave of rift between men and women has begun in the society and consequently, it has become beating around the bush. A general perception could be drawn to form an opinion, such as marches, talk shows, and narrative being preached on media which delineates feminism is a movement to acquire equal rights for all genders in society. To comprehend this issue these cardinal concerns are needed to be addressed.

To determine and understand above-stated concerns, I put my endeavour by analyzing prevalent legal framework of Pakistan to sort out provisions embodied therein, which secure the rights of women. The foremost and fundamental document which regulates relation among state and people is ‘the Constitution’. Following to constitution, a comprehensive hierarchy of legislation is enforced to safeguard the women (citizen).

The constitution of Pakistan expressly guarantees gender equality, Article 25(1) and Article 25(2) state that all people are equal before the law and are entitled to equal protection under the law, and that there should be no discrimination on the basis of sex alone, contrarily, the masses are oblivious on their rights, resultantly, the movement has waged combat within the gender which is ultimately detrimental to a country that, is already facing multiple sources of internal and external conflict. The constitution is the fundamental and paramount law to which all other laws must comply, to which all individuals of the country must defer.

Feminism is not a war against the laws and constitutional processes, in fact, it is a struggle against the societal culture that does not allow us (women) to stand up for our rights.

It can be understood that the constitution guarantees all basic rights for everyone without discrimination on the basis of, sex, race, colour, creed, etc., for example, Article 4 states that, it is the inalienable right of every person within Pakistan to enjoy the protection of the law and to be treated in accordance with the law. No action that is harmful to the life, liberty, body, reputation or property of any person shall be taken, except in compliance with the law. No person shall be prevented or hindered from doing what is not prohibited by law and no person shall be obligated to do what is not required of him by law. The constitution of Pakistan provides fundamental rights which are protected and secured by the constitution. Security of life, the prohibition of slavery, child and forced labour, inviolability of dignity of men, in addition, it provides no discrimination in respect of any sex or class of people.

Pakistan’s parliament has also been introducing various legislations on different occasions for women’s protection and empowerment. The Women’s Protection Bill 2006, The Protection Against Harassment of Women at Workplace Act, 2010, The Acid Control and Acid Crime Prevention Act, 2011, — at the provincial level, — in 2014, the Sindh Assembly unanimously enacted the Sindh Child Marriage Restraint Act, raising the minimum age of marriage to 18 years and making child marriage a criminal offence. We can count several more such steps for women’s rights taken by both federal and provincial governments.

The mentioned legislations and other constitutional moves make us understand that feminism is not a war against the laws and constitutional processes, in fact, it is a struggle against the societal culture that does not allow us (women) to stand up for our rights.

There are two main reasons behind the struggle. First — lack of enforcement of the laws that ensure the rights at the individual level and — second, lack of awareness of the rights granted to us by the constitution. The former is the issue that arises because of the presence of the latter. It’s understood that lack of awareness weakens enforcement of the laws for citizens rights. When individuals are unaware of their rights, they would not struggle for their rights, nor others would care about their rights.

Most of the women in our country are uneducated. According to the Pakistan Economic Survey 2018-2019, “Chapter 10 — Education”, literacy rate of Pakistan was 62.3% and on the basis of sex, literacy rate of male and female was  72.5% and 51.8%  respectively. While women have the right to education in accordance with the constitution but in reality, they are not allowed to study because of the cultural and social taboos, — while the majority of women is unaware of their basic rights. By reason of lack of education, so-called cultural norms or Pakistani Traditions and unawareness of our basic rights, implementation is out of the question and hinders the progress of women. Feminism is a struggle against the patriarchal culture of the society that instils in individuals, from the early stages of life, which lead to discrimination.

How to fight against this patriarchal culture?

For the last few years, we have seen an increase over marches and discussions on various platforms about feminism to bring change in the patriarchal culture Pakistan, where men are mobilizing powers, and women remain as a yes individual. The idea is that these initiatives play a vital role in raising the importance of a specific issue, but in an underdeveloped country like Pakistan, where the literacy rate is 62.3 per cent, these movements are still generating a gender divide and tension rather than addressing the problem. And, if ponder carefully, a clear idea comes in minds. Were such campaigns, such as marches, debates, etc., just about raising awareness and the urgency of the issue? Have these measures minimized the rift or brought some useful solution to the problem? In my opinion, these initiatives have created an atmosphere in which all stakeholders, rather than acknowledging the nature of this issue and seeking an effective way out of the issue, have created more conflicts and feuds within the society.

The potential solution to the transformation of this patriarchal society is practicable. Rather than relying exclusively on outdated approaches, there is a desperate need to adopt a holistic approach. Instead of, brawling, we should all work together to change this conservative society. As Nathaniel Branden rightly points out, “Awareness is the first step towards progress and acceptance is the second step”.

— Second, we need to work to improve our country’s educational trends. In order to achieve, so, we need to incorporate new subjects, such as fundamental rights laid down in the Constitution, so that people will be able to learn from the basic level regarding their rights and responsibilities, logic and critical thinking, communication skills, etc. also we should try to inculcate new concepts to the individuals. For example, self-confidence, self-esteem and self-efficacy.

— Thirdly, on the path of debate, constructive communication should be developed so that the problem can be addressed with an element of mutual respect and fair solution in order to resolve the dispute and build a more democratic, equal and prosperous society.

By Meharma Tanoli
Follow:
Student of Public Administration and Governance in the National University of Modern Languages, Islamabad.
6 Comments