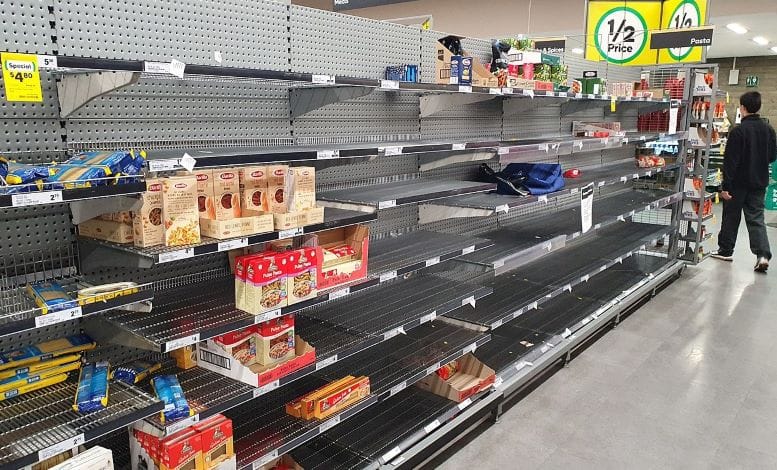 Supermarket shelves that stock dry pasta varieties are almost empty due to panic-buying as the result of the COVID-19 coronavirus outbreak. This was taken at a Woolworths supermarket in Melbourne, Australia.
SHARE

We are living in an era of interconnectedness and countries’ economies are linked with each other. Economically, whatever happens in a particular country reverberates across the world. Likewise, China’s economy is facing troubles because of Coronavirus.

Coronavirus is a new respiratory virus, however, it came from the same viral family as SARS which also began in China. This new virus thought to have originated from the Wuhan seafood market where wild animals traded illegally. An outbreak of the virus has killed thousands of people and infected many more in china and hundred of cases worldwide. The virus has not only affected the lives but also affected international trade.

On new year’s eve, state health officials from China alerted the World Health Organization that a new infection pneumonia-like illness is emerging in Wuhan. WHO instantly found that it was a coronavirus and that it was rapidly expanding within and outside of Wuhan.

The outbreak of coronavirus opened debate around the world. Rumours and conspiracy theories spread globally about the origin of Coronavirus.  Scientists outside of China suggesting a laboratory in Wuhan, China may be the origin of the outbreak. Some in Russia assume the coronavirus is a US biological weapon to hit the Chinese economy. Nevertheless, any assumptions haven’t been proved yet. But the virus hit hard china as well as global trade.

Some in Russia assume the coronavirus is a US biological weapon to hit the Chinese economy.

Initially China lockdown only Wuhan city but when the virus spread over other regions they declared an emergency on other important sites and travel restrictions were also imposed. These measures have disrupted many of China’s industries, tourism, and aviation. For instance, the number of airlines including United Airlines and British Airways suspended China’s flight. The Chinese stock market plunged 8% as coronavirus fear took hold, the investors lost their billions of dollars investment and if we talk about the neighbouring countries specially Pakistan the stock market index slashed by it 1,100 points and other countries like Japan, Singapore and Korea have felt some sort of fluctuations in the prices.

China which is the world’s second-largest economy, and if there is a decline in production it has enormous impacts on international trade. She plays a pivotal role in the global value chain: most of the raw materials of the world travel to China before being transformed into a manufactured product. Currently, China is facing Coronavirus and the damage to the economy is arising around the world for instance; oil prices have fallen in the global market because China is the world’s biggest importer of oil and she is facing Coronavirus which reduced the demand of oil and also the ships have limited their travelling towards China which has affected the global oil market.

Due to Coronavirus outbreak, Pakistan’s stock market index slashed by it 1,100 points. Other countries have felt fluctuations in economies.

Due to coronavirus, many companies have stopped their production in China and abroad because workers are confined at home which causes trouble for companies, such as Foxconn, Apple’s manufacturing partner in China is facing production delay. Nisa and Hyundai car makers couldn’t get parts and temporarily closed factories outside China.

An assessment of 1,000 small and medium-sized enterprises (SMEs) supervised by two Chinese universities found that unless conditions improved, one-third of the firms would run out of cash within a month, the consultancy said.

In order to fully interpret the probable impacts on international trade, we have to look at one of the most recent cases it would be the 2003 SARS outbreak. Like SARS, the Chinese economy has lost 2 percentage in real GDP growth in 2003 and it cost the global economy about $40 billion. It didn’t affect that much international trade. In comparison with 2003, China’s foreign trade is five times bigger today, and its share from the global economy has also expanded. It would not be astonishing if developments in China impact the global trade severely than it would 17 years ago.

If the coronavirus isn’t curbed soon world GDP would drop $1.1tn. It will ultimately haunt the international trade.