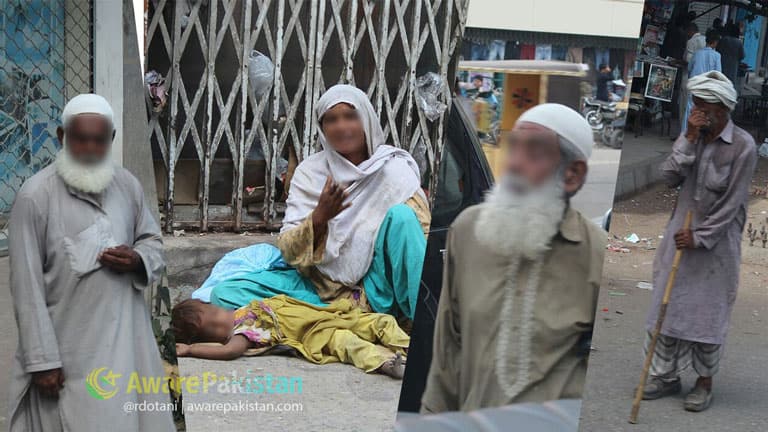 Beggars in Karachi, arrive in markets and streets early in the morning before other working people. (Photo: Raza Dotani, May 2017, Karachi)
SHARE

Begging is one of the most growing concerns of Pakistani society which is now turning into a major social problem. The numbers of beggars are increasing rapidly, they are found everywhere and most importantly in the major cities of Pakistan. According to the research, the stats show that street beggary is boosting up at a high rate as 25 million people of Pakistan are involved in begging and are considered professional beggars.

Initially, there are few beggars seen on the roads and pavements which are usually disabled or handicapped needy people. These were the genuine beggars as they were poor, unskilled and cannot afford to earn due to their disabilities. But now there are people of all ages and genders found begging on the roads. Some of them are disabled whereas the majority of them are fit and healthy. This huge increase in the number of beggars in Pakistan is an evident sign that “Beggary” has now turned into a professional business with the development of a whole begging mafia involved to support and promote it. Begging is a social issue that needs to come into the spotlight by the citizens and the government bodies should work to destroy this beggar mafia.

“Beggary” has now turned into a professional business with the development of a whole begging mafia involved to support and promote it.

There are many reasons due to which people have adopted the begging profession and have joined hands with the beggar mafia. The most important of all the reasons is poverty. Pakistan is already facing a poverty crisis as 39% of the total population is living in poverty. The poor people living under the poverty line are unable to fulfil their basic life needs like proper healthy food, water and shelter. Striving hard to survive they cannot afford to learn any other skill as well. So, this survival frustration leads them to join hands with the beggar mafia and become beggars. The children of the poor families are pushed out to go and beg so that they can earn money for survival.

On the other hand, some poor parents sell their children to the Beggar mafia in exchange for some money.  Research discloses that on average a beggar earns around Rs.400 to Rs.500 a day without doing any hard work. Another cause of beggary is any physical or mental disability. Other causes of growing beggary are unemployment, homelessness, natural disasters, addiction to drugs and old age. Along with these reasons the citizens of Pakistan themselves are also promoting this beggary business by giving them good amounts of money with an intention to help the poor whereas they are earning much better than an average hardworking employee of a firm.

An anti-vagrancy act was passed in 1958 in Pakistan which discourages soliciting for alms in any public place. This act also prohibits exposing any deformity or injury for the purpose of soliciting alms. However, this law was never practised on practical terms and only remained in the books of law.

The growing begging mafia is nurturing other social issues like street crime, robbery and drug mafia. This is a serious threat to the people, their expensive assets and their lives too.

Apart from being a social problem itself, begging is also promoting other social problems in the society and negatively impacting the actual needy people as well as the society as a whole. Begging is more a mafia now. The main purpose of this mafia is to exploit the citizens and loot them financially by any possible means either through begging or by robbing them. The growing begging mafia is nurturing other social issues like street crime, robbery and drug mafia. This is a serious threat to the people, their expensive assets and their lives too. The increasing number of beggars in society is promoting a poor negative image of the Pakistani society in the world. Furthermore, due to these professional beggars, the real needy people are suffering a lot as these professional beggars are a barrier between the actual poor needy people and aid givers. The people stay confused about the actual and the professional beggars as both of them show the same characteristics, ultimately the majority of the time people make the wrong decisions and help the professionals instead of the actual needy. This leads to further backwardness of the actual poor people.

Keeping in view the negativity that is spreading in society by begging, the government and the public both should work together to eliminate this social issue. The government should make sure that there are proper laws in practice to discourage this mafia from tightening its roots in society. The government should launch programs to help these beggars learn and earn by launching skill development programs and opening various jobs opportunities for them like cleaning jobs, road making or city infrastructure jobs. The public on the other hand should also not give these professional beggars money. The public should look around and see before helping out anyone if they are really the deserving ones or not. Things cannot work right without awareness about this beggar mafia which is discussed less in society and is hidden from the eyes of many innocent citizens.