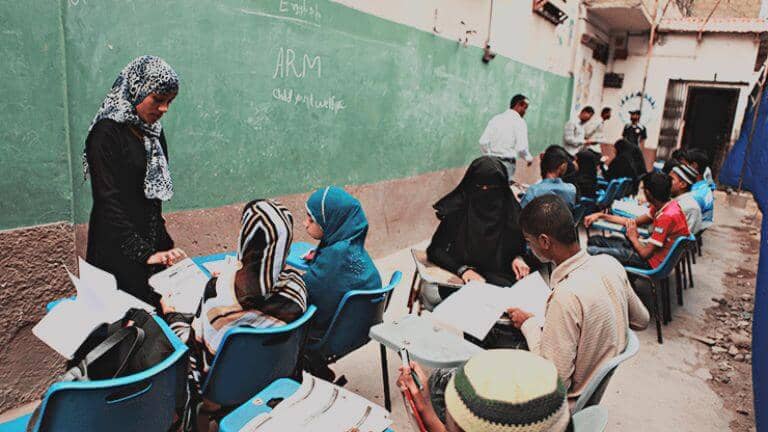 The quality of education delivered to students in Pakistan’s failing education system is poor, and the curriculum is not just outdated but also ineffective. Although there are many contributing factors to this, lack of resources is one of them, and I believe that the current predicament of the Pakistani education system is more a reflection of the failure of “Eurocentric Educational Policies” than anything else.

One would be surprised to know that before the arrival of the colonizers in the Sub-Continent, our education system, i.e., the curriculum, the teaching methods, and the techniques, looked completely different. Subjects like literature, art, mathematics, logic, science, social sciences, religion studies, and philosophy thrived in the region.

South Asia was known as one of the major hubs of knowledge, art, and architecture and produced imminent scholars like Mullah Nizamuddin, Shah Wali Ullah, and numerous others like them. But then things took a downward trajectory when the British arrived and overhauled the system. They westernized the education system of the Sub-Continent, which was a recipe for disaster because the local culture and context were completely ignored during the process. Our current education system is still running based on those ill-informed western reforms, and that’s the reason for its failure.

In the article, I’ll discuss a few aspects of our current education system that require a shift from these ill-informed and inefficient Eurocentric policies to more locally informed ones in order to fix the issue.

Before the entrance of ‘colonizers’, South Asia was renowned as one of the primary centers of knowledge, art, and architecture, producing future scholars.

Our current education system embodies English as the medium of instruction, which was a reform first introduced by the British during the westernization process in the Sub-Continent. I argue that it is one of the contributing factors to the failure of our current education system. There’s a huge difference between the children being taught to read, write, and speak English in a Western society and a South Asian society. The comprehension of text written in English is far easier for a child raised in the West because English is his or her native language. A South Asian child, on the other hand, is raised in a society with diverse ethnicities (each with their own distinct native languages) and no exposure to English as a language of communication in any form. Moreover, the privileges that western children get to enjoy at their earlier stages of development, like educational toys and parental support in learning a new language, are not available to South Asian children, which means it’s harder for the South Asian kids to learn to read and write a new language, and it’s absolutely impractical to expect them to learn the coursework or knowledge with such a weak grip on the language of instruction or text.

Historical accounts show that before the westernization of the education system in South Asia, Arabic, Persian, and other native languages were the languages of instruction and worked well for the people. In the future, we can do away with this Eurocentric policy by getting all the books and curriculum translated into the native languages or by shifting to an arrangement in which English is taught before the actual curriculum is, not simultaneously.

Not only is the language failing our education system, but so is the Eurocentric content and knowledge being taught in our schools. — Before the British reforms, people of the Sub-Continent used to learn administration, philosophy, religion, morality, calligraphy, and art, all of which were relevant to the needs and requirements of the local people of the time. Today, although our situation as a state requires us to teach nation-building, morality, taxes, civic duties and responsibilities, creativity, innovation, curiosity, and knowledge about our local opportunities, strengths, and areas of leverage to our students… — Yet we are stuck teaching mundane and unnecessary things like the chemical formula of water. I’m not saying STEM is not important, but I am emphasizing that not every individual is created to learn or master STEM, and therefore should not be made to learn STEM. It’s high time we took ownership of our curriculum and completely shifted our focus to prioritizing the faculties that are important and useful without fear of missing out on the “enlightened knowledge of the West.”

It’s high time we seized command of our curriculum and entirely turned our attention to emphasizing the faculties that are necessary and helpful without fear of missing out on the “enlightened wisdom of the West.

Westernization altered not only our curriculum for the worse but our teaching methodologies, too. The current teaching methodologies that came about as a result of the westernization process are failing because of their incompatibility with the indigenous context. One of the erroneous components of the teaching methodology that’s inconsistent with the local context is the use of English as a language of lecture delivery. Another aspect of teaching methodologies that does not fit the indigenous context is the concept of lab work, particularly in STEM. Lab work is encouraged in the west to allow students to experiment with various equipment and sciences before deciding on a field to pursue based on their interests. I argue that this model of lab work is not compatible with our indigenous context because we lack resources. An ideal alternative for us would be a system in which, instead of forcing all students to perform lab work regardless of their aptitude, only students with a strong interest and aptitude would be given full support and resources. Moreover, before the westernization of education in the Sub-Continent, there was a system of mentorship or apprenticeship; going forward, it’d be a smarter move to revive it and test it again.

The commoditization of our current education system is another outcome of westernization that’s incompatible with our local South Asian economy. Before the westernization of our education sector by the colonizers, knowledge used to be free. It was once common for people to request teacher apprenticeships to learn knowledge and desired subjects, but after westernization, this practice was completely replaced by capitalistic norms. For example, education got commodified and turned into a mandatory consumable good with costs for not only the knowledge but also extra unnecessary add-ons like “color days,” “festivals,” “parties,” etc. Moreover, westernization and capitalistic norms turned education into a bureaucracy, the success of which was determined based upon the idea of building more and more classrooms and filling them with unmotivated students and teachers with a useless curriculum forced upon them. The bureaucratization of education and knowledge actually made education inaccessible for the poor of the region because of the high transactional and maintenance costs, i.e., teachers’ salaries, administration, and infrastructure. In the future, we can explore the indigenous or ancestral mentor-mentee model (apprenticeship) again as a step towards making education compatible with our local context.

Our current system is failing not because of the incompetence of the policymakers but because it is based on Eurocentric policies, which clearly don’t seem to work for us. The current predicament of our education system is less due to the inefficiency of the handlers and more a result of our ignorance towards the indigenous methods and mechanisms that have worked for centuries in this very region.