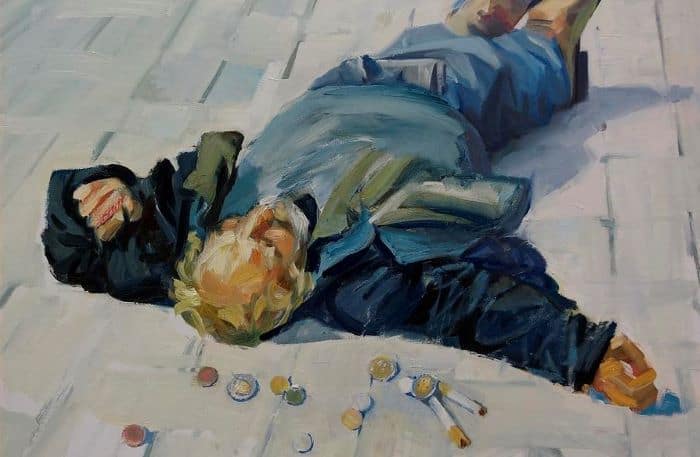 We are in the midst of an epidemic, locked up in our homes. Such isolation usually brings thoughts to linger in and out of one’s mind throughout the day (and night, if you’re a night owl). Nowadays, as we are whining about being locked up with our jading routines and anxious minds, one such moment struck my mind with the remembrance of one episode occurred two months ago. The encounter with a man named Andrew Masih.

Andrew Masih, just another Pakistani citizen constituting the Pakistan below poverty line statistic, roaming around the streets and parks of Lahore, singing away the hunger through Jagjit Singh’s “Hontoon Se Cho Lo Tum, Mera Geet Amar Kar Do,” misty eyes and lost hope. There are many Andrew Masih’s in our country. Ghulam Muhammad, clenching his sick son to his chest, crying at Club Road signal. Rasheeda Bibi, selling ballpoint pens at the footpath near Rado’s outlet at lower Mall with the same expressionless face since God knows how many years.

Masih’s story is different as a friend of mine would point out, “There is no hope in his eyes.” He laid there on the grass with what seemed to be his stock-in-trade, a packet of cigarettes, a matchbox, two medium-sized non-transparent rusty shoppers. He laid there singing to a nearby dog, who amazingly responded to Masih by wagging his tail. At times it’s astounding to see when a person does not have friends, the animals make sure to reach out to the person and listen. The dog found a friend in Masih. Masih got up, approached my friend, and asked him for some water. I hurriedly passed on the water bottle to Masih, he refused to take it from my hands. So, I passed it through my friend. As if he did not want to set any weird impression, by making sure that he was only there for water.

“I’m very much into literature”, said Masih to my friend as he drank water. I couldn’t resist cracking his mysterious behaviour and proceeded to ask him if he held some degree in any subject. I assumed it from his choice of words in his communication. He looked at me. His eyes misted over with tears and started shedding them effortlessly. I regretted my question! I wanted to come up with some other thing to compensate. So, I foolishly started justifying how literature doesn’t need any degree of any sort, it is an innate capacity within a person. His tears caught an intensity, he said: “Shouq Bohat Hai Par Zindagi Ki Azmaishain Khatam Nahi Hoti,” (I have an immense fondness for it, but ordeals of life never end). He was wiping tears away from his eyes with his hands, sobbing, as tears kept on flowing from his eyes. This time I had a regret of being unable to come up with any words of sympathy. I was devoid of all. I shifted my gaze from Masih’s eyes to my friend’s.

All of us were trying hard to choose a response to give to Masih. He stood there for a moment and went away. We tried to occupy our senses with other things to block those moments from getting memorized in our brains. After a while, he came again and pointed towards a white rosebud. “Do you know it’s called Tabassum. But Tabassum also means a smile. So, if it is given to someone, you would be giving two things in one; the flower and a smile,” He handed over one to my friend. Masih tried to create a friend in him. As he did in every other thing he came in contact with. In a moment he was gone again, humming a song, sat at distance, held his face in hands, crying and then smiling, playing with leaflets on the bushes again.

Masih and my encounter was hardly for around ten minutes. However, I recognised he has been enduring lasting sufferings and they were real. Normally, I have things to say to a person in despair, but to Masih, I had nothing to say. His miseries were the type, where words of sympathy do not suffice. He had been left out from life opportunities, that normally a State provides for individual growth on the grounds of equality for youngsters. Now he had entered into his fifties, lost all his hopes in the State on the way. Trying to find peace in everything he can get his eyes laid on but to no avail, defeated, trying again and defeated!

Humming a song, sat at distance, held his face in hands, crying and then smiling, playing with leaflets on the bushes again.

People with sensitive and creative minds often find it hard to settle down in median life. After all, their minds are filled with questions and aspirations. The mix of poverty and such minds is dangerous. The poverty that is there because of lack of opportunities to grow. It can drive people with such able minds like Masih’s insane. Their coping mechanisms are weak, as they are unable to shield their minds from wider realities. In such circumstances, where the State is not able to provide with equal opportunities to all, many minds like Masih’s are crushed under the baggage of unsustainable grief. It is a situation like this, which is dangerous for a country and where talent is given rarely a stage, and rhetorics are appreciated.

He is the reflection of fragments of despair inside all of us in totality. But one dares not compare his/her failures to a man’s, who didn’t even get his hands on the ‘opportunity’ in the first place.  A man who avails the opportunity to try at life and then fails has at least the satisfaction of doing his part of the job. However, a man who doesn’t get to ‘try’ in the first place is surely bound to go insane, like Andrew Masih.

As we are here under the lockdown. We seem to be cursing the situation that has put us all into a never-ending monotony of days and nights. Using the term ‘insanity’ to depict our mental situations. Claiming that this isolation will lead us to lose our sanity. While not realizing what insanity really is. Times are really tough and that is a fact. But unlike the 1918 epidemic, this time we have opportunities provided to us by modern digital gadgets and tools, advanced mass media with quick accessibility to news and awareness. We have the opportunity, we have the hope to bring the world to normality again by doing literally nothing, but holding up strong. Meanwhile, the monotony can be ‘killing’ but it can be overcome. Just do what you always wanted to do once you wished you had the ‘ time’. So here we are, yet with another opportunity.