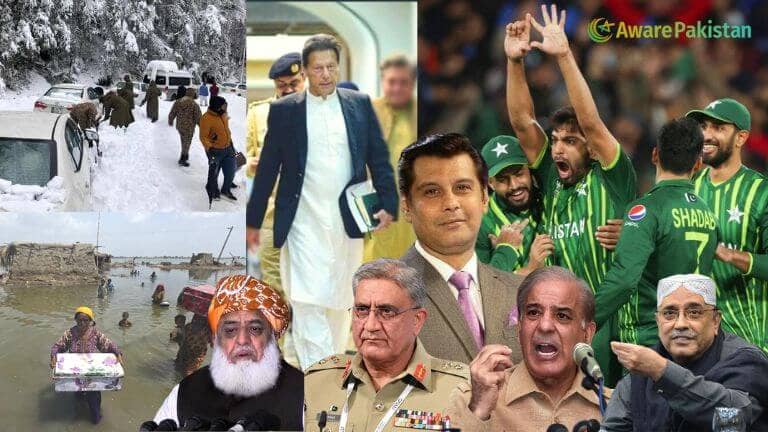 With the year 2022 ending, flashbacks unveil sweet and bitter memories that crossed the nation’s mind.

Life is a roller coaster ride; we must contain ourselves through the fluctuations. January grew in blue as Murree was a death trap, targeting about 23 people due to heavy snowstorms and partially because of carbon monoxide inhalation. Next was a depression of political crisis; the enraged opposition (PDM) geared up confident preparations to blow away the house of cards built by Imran Khan, the supremo leader of PTI, with the no-confidence motion shot. With a 180-degree shift in the regime, Shahbaz Sharif of PML-N became the 23rd Prime Minister of Pakistan. Emotions cascaded to May as IK announced a long march to Islamabad, but all in vain.

Yet more was to come. According to Wikipedia information, on June 14th, flooding started at a rising rate, continuing up to October, narrowing fiscal space with a 33 million population, about 15% of the total, thrown into a desperate state. Amid the drama, Pakistan celebrated its 73rd Independence Day. October attached more weight to the nation’s heart when the veteran journalist Arshad Sharif was shot dead in Kenya on the 23rd of the month. Alas!

Lastly, November marked its debut with events in motion. General Qamar Javed Bajwa left his legacy in the hands of General Asim Munir Ahmed by completing a six-year tenure. Additionally, the men in green showcased a brilliant performance, driving into the finals of the T20I World Cup 2022. However, fate refused to cooperate. The Pakistan cricket team could not win the title but returned to test matches, demonstrating the quote: “Enthusiasm is the baking powder of life. Without it, you are flat. With it, you rise.”

In a nutshell, changes are a part of life. To stand as one nation, we must admit our mistakes and work hard to fix them. Let the hope of 2023 bringing stability to Pakistan inflate.