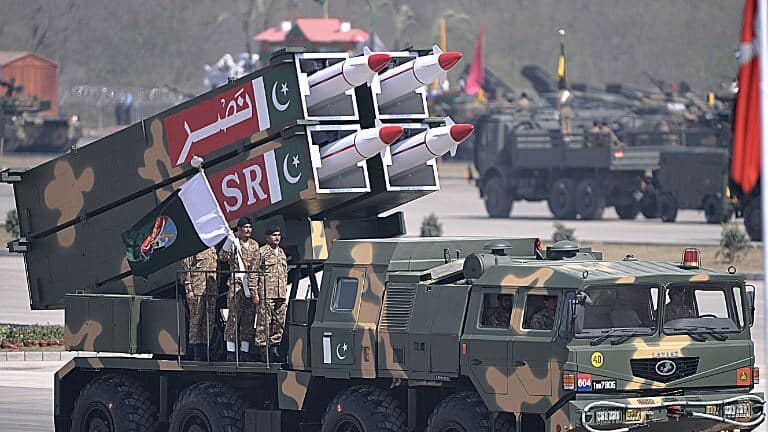 The rationale of Pakistan’s strategic program, which was undertaken in response to India’s nuclear weapons program, Pakistan’s threat perception, and the regional security situation compel Pakistan to be vigilant and take necessary measures to maintain strategic stability in the region. Needless to say, Pakistan faces an existential threat from India. However, in recent years, Islamabad has demonstrated its capability to defend territorial integrity and sovereignty.

For instance, effectiveness was demonstrated during the Balakot incident, when the Pakistan Air Force shot down two Indian military aircraft and captured one pilot. Pakistan has also thwarted several attempts by Indian submarines to sneak into Pakistani waters. They were also able to follow the trajectory of an Indian BrahMos missile that fell in their territory in March this year, but exercised restraint.

Therefore, a nuclear deterrent is essential to South Asia’s security calculations. As part of its goal to maintain credible minimum deterrence in collaboration with Islamabad’s conventional military assets and all aspects of state power, Pakistan’s nuclear capacity deters war through full-spectrum deterrence (FSD). Since India’s deployment of destabilizing technology upsets the regional strategic balance, Pakistan’s deterrent strategy is essential for maintaining peace in the region.

In 1998, India conducted five nuclear tests consecutively on May 11 and 13. India’s intentions following the tests were that “Islamabad should realize the change in the geostrategic situation in the region and the world.” “It must roll back its anti-India policy, especially with regard to Kashmir.” Times of India, May 19, 1998 (Advani) Due to India’s aggressive political and strategic actions, Pakistan had to respond in its own manner.

Pakistan responded with six successful nuclear tests on May 28 and 30 (Chagai-I), five to match the Indian tests of 1998, and the sixth one in response to India’s 1974 test (Pokhran-I). The then Pakistani PM said, “Today we have settled the score with India.” Pakistan’s missile program is driven by its security imperatives and regional threat perception. Pakistan’s missile program is meant only to counter India and to maintain BoP in the region. On the other hand, India has a missile range of up to 5000–8000 km (Agni-V). upcoming Agni-VB and Agni-VI with up to 12,000 km; therefore, India’s ambition and aggression pose a threat to strategic stability in South Asia.

Ashley J. Tellis is an Indian senior fellow at the Carnegie Endowment for International Peace. One of the key players who helped make the US-India nuclear deal possible made negative statements about Pakistan’s nuclear program multiple times on different occasions.

On August 12, 2022, Ashley J. Tellis appeared on an edition of “Off the Cuff” to discuss his most recent book, “Striking Asymmetries: Nuclear Transitions in South Asia,” with The Print’s Editor-in-Chief Shekhar Gupta. He stated that Pakistan views nuclear weapons as a “form of  with the weapons having utility not only for deterrence but also as a “license for underwriting provocative

Earlier, Tellis wrote in his book, Troubled Transition: Emerging Nuclear Forces in India and Pakistan, 2019, that “Pakistan may have to use nuclear weapons first or even early in any future war with India.”

Moreover, in Strategic Asia 2017–18, he stated that “new threats are posed by China’s and Pakistan’s nuclear arsenals and Pakistan’s continuing terrorism against India.”

Pakistan’s Missile Program: A Source of Deterrence in the Region:

Pakistan’s missile program consists of multiple missiles to counter the Indian missiles, such that “Abdali” was constructed to counter India’s “Prithvi-I.” It has ranges ranging from 180 to 200 kilometres. The Short Range Ballistic Missile (SRBM) is named after the late Afghan King Ahmad Shah Abdali. The “Ghaznavi” range of 290 km was first tested in 2002. It is named after an 11th-century Muslim Turkic leader and is capable of both conventional high-explosive and nuclear warheads. It was developed to counter “Prithvi-II,” which can target any movement along Pakistan’s border. “Shaheen” range, 750 kilometres, It was built to counter India’s “Agni-I,” capable of both conventional and nuclear warheads.

“Ghauri” was first tested in 1998. The missile is named after Afghanistan’s ruler, Shahabuddin Muhammad Ghauri. Range: 1,250-1,500kms Weight: 15,000+ Medium-Range Ballistic Missile (MRBM) with conventional and nuclear warheads The Ghauri Missile can reach many major targets within India. This missile is counter to India’s “Agni-II” and Pakistan’s only liquid-fueled missile. “Shaheen-II” was first tested in 2004. The range is approximately 2000 kilometers and is capable of both conventional and nuclear warheads. “A missile designed to meet Pakistan’s strategic needs while maintaining desired regional deterrence stability” “BABUR” is a ground-launched cruise missile. Both nuclear and conventional payloads can be delivered by it. successfully engages its target with precise accuracy. The range is between 350 and 700 kilometers, and it is capable of underwater launching and targeting.

Pakistan conducted the first test of “Shaheen-III” in March 2016. The range of a medium-range ballistic missile (MRBM) is up to 2,750 kilometres, which covers the entire Indian landmass, including the Andaman and Nicobar Islands; a second strike option is the Indian Triad Command Service, which carries both conventional and nuclear warheads. Pakistan’s longest-range missile

The subsequent missiles are merely designed to discourage Indian habituation in the area. A strategic restraint regime was also repeatedly suggested by Islamabad to New Delhi, but the proposal was rejected due to India’s desire for hegemony. Pakistan has a 2,750-kilometer maximum nuclear range to counter India’s second-strike launch sites. India, on the other hand, is prepared to produce missiles with a maximum range of 12,000 kilometers.

The delivery system of Pakistan is the product of the relentless efforts of the National Command Authority (NCA), particularly the Strategic Plans Division (SPD). These indigenously developed delivery systems are the reason why the enemy, despite being twice as large and possessing twice as many resources, does not dare look down on Pakistan. Islamabad’s defense capabilities demonstrate its unrivaled defense. The development of delivery systems in Pakistan is not aimed at initiating an arms race; it is to ensure regional peace, strategic stability, and defense.

The author is a IR student at DHA Suffa University, Karachi