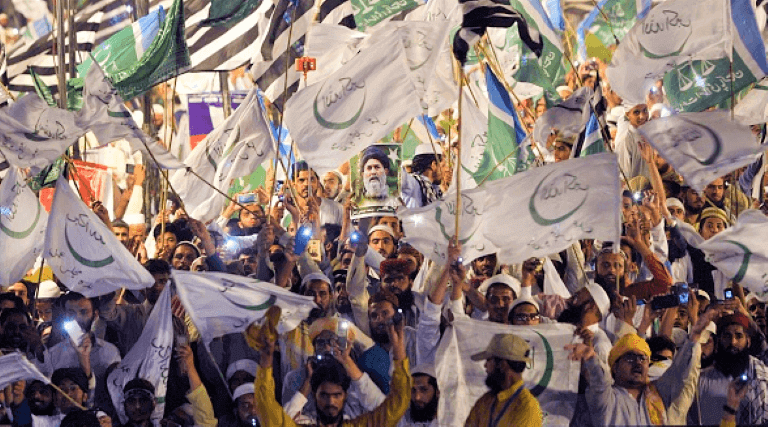 It is clear from the name “Islamic Republic of Pakistan” that Islam and politics are interlinked in Pakistan. Pakistan came into being on August 14, 1947, on the basis of religion and as an Islamic state. The entire struggle of Quaid e Azam and the Muslim League was based on creating a separate nation for the Muslims of India. It is crystal clear that religion and politics were the core materials for the establishment of Pakistan. If politics and religion were not interrelated, there would have been no Pakistan. At that time, the politics of the Muslim League needed the base of a religion to achieve the goal of a separate nation, and the Muslims of United India needed the politics to attain a new, separate, and Islamic state for them.

Since 1947, religion has been injected into every single political matter. Religion has always played a dominant role in Pakistan, whether it is the formation of a constitution, the development of educational curricula, or the provision of employment. Aside from these, every single political party that has come to power between 1947 and 2022 has used religion as a friendly election campaign. Even all the martial laws imposed in the Islamic Republic of Pakistan involved religion to some extent. Starting with the Muslim League and progressing to the PDM government, every political party in Pakistan used religion to attract voters. The Muslim League became the most powerful Muslim political party in United India on the basis of Islam, and a separate nation was demanded on the basis of the religion of Muslims. Other political parties, such as the Azad Muslim Conference, were unable to gain Muslim support simply because they did not demand a separate nation and preferred to live in United India. This ideology did not make any sense because if this had happened, there would have been no reason left for the Muslims to sacrifice themselves for independence as it would still keep them under the Hindu government.

After Pakistan came into being, Quaid e Azam Muhammad Ali Jinnah used the ideology of Islam to inject political awareness into the people of Pakistan. He told people to live as Muslims and not as Sindhis, Punjabis, Balochis, or Pathans. He desired for Pakistan to be an Islamic Democratic state. A country where democracy reigns supreme, but the constitution of that democracy is defined by Islam. Hence, Jinnah interlinked politics and religion for the forthcoming future of Pakistan. Jinnah also emphasized the importance of Islam in Pakistani politics. According to the constitution of Pakistan, it is mandatory for the President and Prime Minister of Pakistan to be Muslims. This is how much politics and religion are interconnected in Pakistan.

If you talk about the ideologies of every reigning political party in Pakistan, religion and religious policies are a must-talk-about thing. Some of the examples are:

1 — In the 1960 presidential elections against Fatima Jinnah, Ayub Khan used Islam as a shield to win the elections. He emphasized the fact that in Islam, a woman is not allowed to rule a state, so it would be against Islamic values. The Muslims at that time were not politically aware, and so the consequence was that a loyal sister of the loyal founder of Pakistan was not able to become President of Pakistan.

2 — When Zulfiqar Ali Bhutto launched his political party, “Pakistan People’s Party,” the party changed the slogan from “Socialism” to “Islamic Socialism” to make it feel more likeable to Pakistanis and attract voters.

3 — When General Zia ul Haq declared martial law in Pakistan on July 5, 1977, he hid behind religious garb and a curtain. He promised the people of Pakistan that he would establish Islamic laws and culture, and he won the referendum using a religious card. About 98% of people voted for Zia’s reign to increase by 5 years, as he asked all Muslims to vote in favor of him if they believed in “La Ilaha ill-Lallah.” No Muslim could believe in Kalima Tayyiba, so he received boxes full of votes in his favor to extend his reign.

Zia also gave people hope for introducing religious values and laws in Pakistan, starting with the fine imposed for not respecting Ramazan and allotting prayer time for office workers.

4 — Bhutto came to power on a religious card, and ironically, he was deposed on the same card. He tried many things, like giving the 1973 constitution of Pakistan a more Islamic shape, having holidays on Fridays instead of Sundays, banning liquor, and being called the leader of the Muslim world, but it all failed when Tehreek-e-Nizam-e Mustafa came against him. Religious parties and ulama used to call him “Shareer-e-Azam” instead of “Wazeer-e-Azam.” Bhutto had all the religious powers against him, and hence he suffered the consequences of going to jail and getting sentenced to death.

5 — In the 1988 election, General Hameed Gul was the ISI chief at that time, and he formed the IJI (Islami Jamhoori Ittehad) against Benazir Bhutto to stop her from becoming Prime Minister of Pakistan. In this movement, Fazl ur Rahman was also a prominent religious leader. What people heard and saw was that Islam is under threat if a woman is the head of state. People’s minds were manipulated using their beloved religion, Islam. But this time, the people of Pakistan still voted for Benazir with the sympathy of Zulfiqar Ali Bhutto, and so she won the elections, but soon the regime was changed.

6 — Religious cards were also used during the First Afghan War, when General Zia established hundreds of thousands of madrassas in Pakistan, which were controlled by the Deoband sect. After the US blamed Madrassahs for 9/11, Deoband Parties swept elections in KPK under the banner of MMA (Muttahidda Majils e Amal).Religious parties have rarely come to power in Pakistan, but when they have, they have used Islam to sway voters.

7 — In 2014, Tahir ul Qadri used the religious card against the PML-N in an attempt to destabilize the government and force new general elections, but everything went wrong when hundreds of people were killed in the Model Town incident. Following the religious card cost the people this time as well.

8 — Imran Khan used the term “Riyasat e Madina” to get people who followed religious parties to vote for him. There is no doubt that a large number of voters supported him because of his anti-corruption stance, but the concept of Madinah was and continues to be the most discussed topic in Imran Khan’s speeches.

9 — Fazl ur Rahman has played the religious card against Imran Khan since he entered politics. Khan is accused of being an Israeli agent merely because he married a Muslim-turned-Jewish woman, Jemima Goldsmith. Every single political party that opposed Imran Khan used the same term. PDM accused Imran Khan of trying to harm the Islamic values in Madinah when people chanted “Chor, Chor” (thieves) to their ministers recently.

Hence, every single time in the politics of Pakistan, there has been an intervention by religion. Even the United States used religious cards to change every single regime in Pakistan. Using the hazy image of terrorism, the US intervened in every Muslim country. America portrayed Islam as an extreme religion and intervened in the politics of Muslim countries like Pakistan and Afghanistan to achieve what they wanted, which was oil, coal, and gas. They used 9/11 to intervene in Afghanistan via Pakistani airspace, resulting in the deaths of thousands of Pakistani soldiers. The drone attacks in the name of killing terrorists actually took the lives of innocent children, women, and people in Balochistan just to ignite the fire among Balochi separatist parties and Pakistan’s Armed Forces. This was a tactic of the United States to weaken Pakistan from the inside and cripple her economically.

In conclusion — Religion has always been used as a political weapon, and politics has always been used as a religious weapon in Pakistan. The main focus of politics has been Islam, and the main focus of Islam has been politics in Pakistan. The only way to solve this dangerous problem is for Pakistan’s young people to learn the teachings of Prophet Muhammad (PBUH) and the Quran. When people learn Islam themselves, they will not have to be told what to do and what not to do. People won’t be used by politicians in the name of Islam. If Islamic laws are followed properly, no politician will be able to use Islam as propaganda in politics. The politicians themselves need to sit down and settle this issue once and for all. If not, the Supreme Court of Pakistan should take Suo moto notice and settle this sizzling issue. Let’s all hope Allah brings brotherhood among the people of Pakistan and makes it the great nation Quaid e Azam intended it to be.