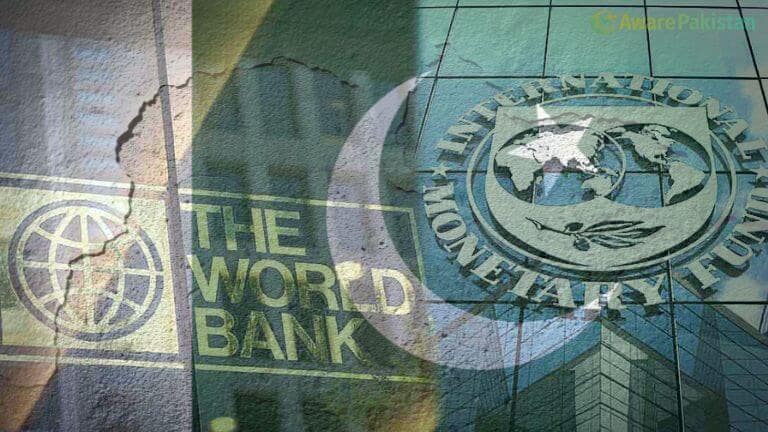 The United States has successfully influenced the two largest institutions in the world: the International Monetary Fund (IMF) and the World Bank, which they use as a tool in their expansion plan to further their economic neoliberalism-based foreign policy. Since 1950, Pakistan has been a member of the IMF. The IMF gives Pakistan loans, but in doing so, they also create policies on how these loans should be used, ultimately taking advantage of Pakistan.

The conference that took place in Washington in July 1944 led to the formation of two institutions: the International Monetary Fund (IMF) and the International Bank for Reconstruction and Development (IBRD). These institutions were established to secure the global dominance of the United States by ensuring the prevalence of the American dream of capitalist ideology in the world. The IMF was created to provide loans to countries to solve balance of payment crises and enable trade to continue, which I believe actually helps countries solve their external debt problems by generating more external debt. The IBRD was supposed to provide loans for post-war development, such as rebuilding infrastructure like roads and railways. However, these claims have not been realized. Instead, these institutions have worked since their founding to integrate governments, particularly those of less developed nations, into a powerful economic system dominated by large transnational corporations.

The third annual report of the World Bank focused on the need for bank services and accused borrowers of not borrowing from the World Bank. It attributed economic instability to borrowers’ lack of technical and planning expertise. The report should have focused on attracting investment and opening doors for these developing countries, but it did not. Everything ensured colonial trade and the economic pattern that existed during the colonial period. Even though developing countries are no longer colonies, these clever minds have still found a way to colonize our minds.

Policies devised by colonial institutional structures were not intended to benefit people, but rather to facilitate the process of extreme exploitation.

The United States has tried hard to implement its free market policies, exploiting every opportunity it gets. The 1979 oil crisis was caused by a decline in oil production following the Iranian revolution, which caused oil prices to skyrocket. Countries started rushing to the IMF for balance of payment support. The IMF struggled to meet the rising demand for credit, and so it seized the opportunity to impose its views on the free market. The Washington consensus established policies for developing countries suffering from negative balances of payments and seeking help from organizations like the World Bank and the IMF. According to them, the goal was to foster development by implementing these policies. Leaders of the developing world were convinced that obtaining further loans to pay off previous debts would undoubtedly be beneficial, and so they had to take structural adjustment reforms into account.

Anyone who seeks assistance from these agencies is given the same remedy for various challenges. They adhere to the bank’s adjustment program policy, which is a one-size-fits-all approach. These institutions claim that structural adjustment policies (SAPs) lower inflation, promote economic growth, reduce fiscal and balance of payment deficits, and stabilize the economy by reducing external debt. However, the reality of these structural adjustment projects is substantially different from the image presented by policy implementers. Pakistan, a nuclear-powered country, has been under the IMF program for the 22nd time, but has only received poverty and debt in return. The money that we could have invested in improving health services, fostering education, and providing housing is being used to repay the rising debt, making bankers in industrial countries wealthier.

When comparing Asian countries, China and Japan have experienced high growth rates, particularly because their focus was on state-directed policies. We are being hurt by policies that we did not make. Those Western economists who used to claim that neoliberal structural adjustment policies would reduce debt burden must look at the debt burdens that Pakistan has reached.

Structural adjustment policies imposed by the IMF and World Bank claim to lower inflation, promote economic growth, and stabilize the economy, but the reality is often different.

The proposed solutions in SAPs call for currency devaluation to encourage exports, trade liberalization through the elimination of protectionism, privatization of enterprises to improve performance, deregulation which involves the elimination of maximum and minimum prices, creation of incentives to attract foreign investment, and the elimination of consumer subsidies to lower the budget deficit. Here, the question arises: If these policies are the best option available, why has Pakistan, which is a participant in the IMF program, been unable to address its issues?

These policies prove devastating for developing countries. In reality, when a currency’s value falls, exports become more competitive and imports become more expensive. A devaluation typically increases inflationary pressures due to greater import costs and growing export demand. Additionally, producing exports drives up the cost of basic goods, reducing consumption, and since importers can buy our exports for less money, we continue to run a deficit. Trade liberalization simply makes it easier to export resources to the West, as happened throughout the colonial era. Moreover, privatizing enterprises also means giving up all potential profits from those businesses.

Policies devised by colonial institutional structures were not intended to benefit people, but rather to facilitate the process of extreme exploitation. Pakistan established Western policies as a benchmark for development. Pakistan must realize reality before it is too late as its economy is deteriorating rapidly. The West, especially the US, is supporting the domination of the neoliberal economic world order on a global scale. Under the guise of modernization and development, they are actually attempting to exploit and subjugate weaker nations. According to post-development theorists, the primary goal of development is to raise people’s standard of living. However, rather than getting better, it is getting worse. Is this the kind of development Pakistan wanted? Clearly, it is not what Pakistan expected.