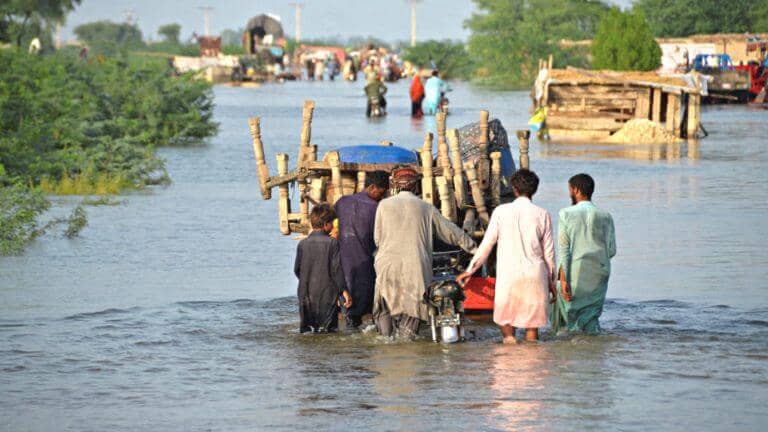 Whenever a disaster occurs, it always leads to debates about what caused it. These catastrophes also prompt policymakers to think about and make policies to prevent such situations in the future. The recent flooding disaster in Pakistan unleashed by the heavy monsoon rains is no exception.

As Pakistan is ranked among the ten most vulnerable countries to the impacts of climate change, the reasons for this calamity are rightfully linked to these effects of climate change. However, some individuals believe that the absence of dams is to blame for the destruction caused by these floods. They also think the dams are the only way to prevent similar unforeseen disasters in the future. So the question of whether dams are actually necessary arises. Are dams the only answer to all of our problems? Let’s explore these questions in more detail.

Dams have harmed our wildlife and made rivers less useful for recreation.

After this catastrophe, some people, particularly those who live in North Punjab and Khyber Pakhtunkhwa (KP), have become more vocal in their demands for the building of dams like Kalabagh. They mourn the loss of water worth billions of dollars to the sea and believe this flood could have been avoided if there had been more dams upstream.

The supporters of the Kalabagh dam appear to have lost sight of reality. They should consider their statements before requesting the disputed dam’s revival. Sindh, Balochistan, and the Siraiki Belt were the most badly affected areas by the excessive rains this year. In reality, these areas were completely destroyed by the floods brought by heavy rains. Murad Ali Shah, the Chief Minister of Sindh, questioned the campaigners of the Kalabagh dam about how the dam would have kept Sindh and Balochistan from flooding when the floods were brought on by the rainfall in the provinces. How might rainwater from Sindh and Balochistan have been sent up to the north? What justification is there for the propaganda for Kalabagh Dam?

It is possible that some of them would want to shift the topic to the flooding in Swat’s Kabul River. They fail to consider the fact that the river had much more water than usual. It only resulted in destruction when the Munda headwork collapsed and the Mahammand dam sustained damage. The Kabul River would not have submerged and destroyed the Nowshera district if it had not done so.

The value of constructing water reservoirs to store surplus water cannot be questioned. However, the latest tragedy does not provide a reason to restart the contentious Kalabagh dam project. How might the Kalabagh dam have prevented the destruction caused by constant rains in Sindh, Balochistan, and lower Punjab?

It is also important to note that, this year, the destruction was multiplied by the dams. In Sindh and Balochistan, several smaller and bigger dams failed. The dam collapse largely caused devastation in the Balochistan province. Because of poor infrastructure, the dams could not withstand the pressure and began to break, allowing the water to rush through everything in its path. So, in addition to building dams, good infrastructure is also essential.

According to renowned Pakistani hydrologist Dr. Hassan Abbas, dams are never the best solution to stop floods. He thinks that dams can prevent small floods, but each time a massive amount of water arrives, they fail and eventually fall, wreaking unimaginable destruction.

Since it is debated whether dams can stop floods or not, finding other solutions is still necessary. According to water experts, the only effective and long-lasting way to prevent floods and minimise the damage they cause is to clear the pre-existing natural course of rivers and tributaries. In this time of catastrophe, the barriers in the form of infrastructure have aggravated the havoc wreaked by the monsoon rains. The government must take accountability and remove all illegal disruptions to rivers, streams, and tributaries’ natural routes.