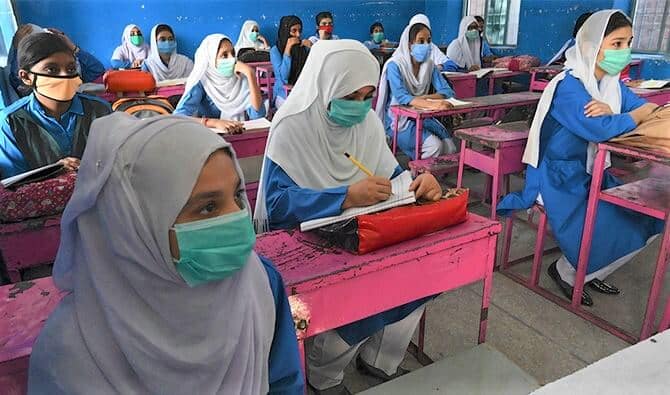 With the Omicron variant spread across the world, it is transpicuous that we might not be rid of the Covid-19 pandemic as soon as we had hoped. It has been declared that the Omicron variant will spread more rapidly than the original SARS-CoV-2 virus and could easily affect even those who are vaccinated (2 shots). People have been advised to get booster (third) shots of their respective vaccines, giving rise to panic and fear that just ended after the most formidable version of coronavirus, the ‘Delta’ variant died down. What might ensue next is unknown. What’s quite evident is that the pandemic is hitting us harder than we initially expected and one of the major causalities to this is education on all levels.

The education system in Pakistan has severely been impacted due to the pandemic and intermittent lockdowns since education centres are easily the most vulnerable and perceptible sights for the fast-spreading of the virus. This means education centres are the first places to be closed down until further notice. The Annual Status of Education Report (ASER) has regrettably reported that there has been a two per cent decrease in school enrollments in Pakistan as well as the stupendous losses to learning abilities. There is also a huge influx of children who dropped out of schools due to closures and no reductions in school fees. These children are highly unlikely to return to classes as the majority of them belong to penurious households and have opted to become juvenile breadwinners to support their families meet ends.

Disappointing performances have been reported in all areas such as language skills, mathematical abilities and English competency with very clear reverses in the progress made during the covid free previous class years 2018-2019. The factors responsible for these dissatisfying numbers are mainly the enormous disparity present between high- and low-income classes as low learning outcomes and poverty go hand in hand. At the primary level which is considered the stepping stone or ‘base’ for any educated person, the learning gaps and shortcomings in schools have only been aggravated due to the inequalities between government and private schools. It is only the state, as per the Nobel Laureate Amartya Sen, that can ensure equality between classes and provide them with equal opportunities so the poor do not suffer invariably as commanded by social justice.

In attempts to mainstream Madrassas, Musharraf turned them into the breeding grounds for extremism and radicalism with little or no focus on proper education.

Pakistan currently has the world’s second-highest number of children out of school at an estimate of 22.8 million children between the ages of 5-16 which represents 44% of that age group population (UNICEF Pakistan). There is no level playing field for children both gender-wise as boys outnumber girls at every stage and in terms of socioeconomic status such as the example of Sindh where 52% of the poorest children are out of school. The Federal Minister for Education and Professional Training Shafqat Mehmood said “in over 70 years, we could only create islands of standard education in our country. But we couldn’t spread this to the entire country. It is just scattered here and there.” He identified that only elite schools were producing people with good English skills which he regarded as something which ‘gets you places.’

Clearly, there is left much to be desired from our education system in terms of the expected results. The illiteracy rates are staggering in number while the education quality remains sub-par. The workforce that is churned out of this system is incompetent due to lacking any practical knowledge of their desired jobs. There is a dire need now more than ever for strict reforms and a level playing field for masses of students. The recent events of ASER’s reports and the Single National Curriculum’s (SNC) formal inauguration by the Prime Minister have brought the inequity in Pakistan’s education system into the public discourse which raises the question of whether the long-desired results and the purpose of SNC will be achieved or are these just myths. Though there are more doubters than firm believers.

Every province is different and faces different challenges, the government’s single prescriptions for all ails in the form of “Single National Curriculum” is laughable out of implementation

The problem with the SNC, and there are many, is that it all looks good on paper when in practicality, achieving all that it aims does not just need a mere initiative but proper background work and machinery to mobilize the plan into action. It boasts to be the key to doing away with the current education apartheid by providing equal opportunities to every child in Pakistan regardless of their socioeconomic background. However, it faces numerous challenges, such as its attempt to bring Madrassas’ into mainstream education by requiring the seminaries students to study modern material and appear for board exams. These attempts have been made in past without bearing much fruit during the eras of Ayub, Bhutto and Zia even Gen. Musharraf, instead these seminaries turned into the breeding grounds for extremism and radicalism with little or no focus on proper education. Despite the negative impacts of madrassahs on the students and society as a whole, the Islamiat section in schools is to be taught as done in madrassahs which raise questions, notably, the students now have to memorize more religious content than they did before. A case was filed for the religious content to be taken out following the landmark verdict of Chief Justice of Pakistan (CJP) Tasadduq Hussain Jilani in 2014, the Supreme Court bench directed the implementation of minority rights in the country. How is the Pakistan Tehreek-e-Insaaf’s current government so sure these attempts will work this time around and not produce even more extremists and radicals now that the system is being merged into one?

The SNC is also causing quite the discourse among provinces that constitutionally are allowed discretionary powers when it comes to matters involving education. Sindh straight up opted out of implementing SNC and many schools in Punjab have filed suits too following closure warnings by the government for not implementing the SNC in the new academic year. Recently, magistrates accompanied by rifle-bearing policemen are interrogating 12-year-olds in Punjab. Their teachers are asked to stand silently in the corner. This is making us out to be a laughing stock and has robbed the credibility of education in Pakistan. A Pakistani version of the mutawwa is emerging. There are better alternatives to these actions and SNC implementation, instead, the federal government should focus on redressing the situation by working with the provinces not against them to overhaul the current system so the flaws could be rectified. These flaws exist not only in the material taught but also in the dilapidated conditions of education centres.

Instead of policing people and handing out punishments to staff, the focus should be on recruiting newly qualified teachers to meet the shortages of teachers all over Pakistan. Incentive-based programs should be introduced to encourage highly qualified youth to choose teaching as a career. Federal and provinces should get together in the effort to produce a workforce that possesses practical knowledge, not the ‘neem-hakeems’ that are regarded as ‘khatra-e-jaan’. The millennial youth possess a certain kind of social media awareness whereby sooner or later they will realize the unfairness they’re facing.

Honestly, this is all an explosion waiting to happen if the government only focuses on haphazard measures like SNC. Every province is different and faces different challenges, the government’s single prescriptions for all ails in the form of SNC is laughable out of implementation. It is imperative that measures that dent the already vulnerable system should be actively avoided. In both the covid times and beyond, it is important to establish an education system that is resilient and prepared so that all efforts do not go to waste. This is the need of the hour