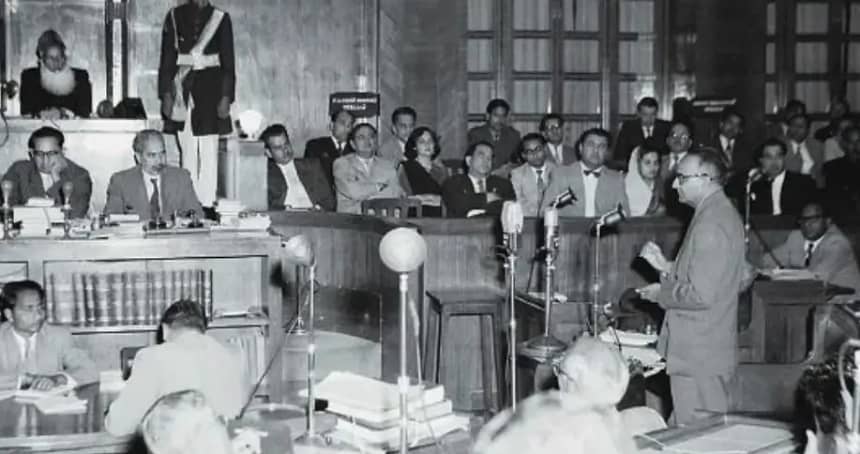 In 1947, Pakistan was born with an enemy outside its borders waiting for the political, social, and administrative structures to crumble. The only panacea for Pakistan was to strengthen its institutions and political culture with a cohesive framework of principles known as the constitution. Quaid e Azam understood the significance of the constitution in a democratic society. He stated:

“The constitution of Pakistan has yet to be framed by the Pakistan Constituent Assembly. I do not know what the ultimate shape of this constitution is going to be, but I am sure that it will be of the democratic type, embodying the essential principles of Islam. Today, they are as applicable in actual life as they were 1,300 years ago. “Islam and its idealism have taught us democracy. It has taught equality between men, justice, and fair play to everybody.”

The 1935 Act of India, with some amendments, was adopted under Section 8 of the Independence Act of 1947. To make a new constitution as soon as possible, a constituent assembly was formed for the formulation of the constitution. Today’s history would have been different if an indigenous constitution had been formulated. Unfortunately, the colonial hangover and its legacy hijacked our nascent political system, and the “Viceregal Model of Government,” according to Khalid bin Saeed, was continued. The constituent assembly found constitution-making a hard nut to crack because of the following challenges:

Security and sovereignty were the main objectives of Pakistan. The biggest threat to Pakistan’s sovereignty and security was India. In the early days, the state’s priority was to strengthen its military and national security to counter India. In the long run, this priority was detrimental to democracy, the constitutional-making process, and the political culture of Pakistan. The demise of Pakistan’s founder, M.A. Jinnah, on September 11, 1948, and the subsequent assassination of the country’s first Prime Minister, Liaquat Ali Khan, on October 16, 1951, created a huge vacuum that derailed the democratic process and facade. Parliamentary democracy began to erode. Unfortunately, their successors, who were undoubtedly men of integrity, lacked sufficient political maturity and statesmanship to steer the country in the right direction and failed the nation.

While the political elite of West Pakistan favored a unitary form of state with a unicameral legislature, those from the eastern wing wanted it to be a federal form of state with a bicameral chamber and maximum provincial autonomy. same as the politicians above the west wing who push for a presidential form of government. Quaid e Azam remarked in 1947 that the “presidential system was more suited to Pakistan.” After the independence, Quaid e Azam decided to take the position of governor-general and served as President of the Constituent Assembly. Meanwhile, those belonging to the east wing wanted the government to be a Westminster-style parliamentary democracy. A consensus was difficult to develop in such a situation.

There was no big problem with declaring Islam the state religion, but there have been heated debates about the nature and specifics of Islam that have divided the entire nation. The non-Muslim members of the constituent assembly named Bhupendra Kumar Datta, Raj Kumar, and Birat Chandra Mandal proposed amendments in an objective resolution to remove Islamic provisions by quoting, “Quaid e Azam wanted a secular state.” The great leaders of our country said that the principles of the constitution shall be based on Islam. In reply, Maulana Shabbir Ahmed criticized these amendments by saying, “Islam has never accepted the view that religion is a private affair between man and his creator.” Maulana Shabir elaborated that both Islam and the state are interlinked. After this heated debate, voting was proposed, and these amendments were rejected. The minorities’ dream of a secular state was shattered by the majority. The majority of Muslims were not ready to create a secular state. This issue fomented resentment in non-Muslims and delayed the process of constitution-making.

The Urdu-Hindi controversy was superseded by the Urdu-Bengali issue after 1947. Along with the formula of representation, this was the most contentious problem with several dimensions. Jinnah wanted to have one state language (Urdu) because it would have created unity among the nation. Urdu was spoken in West Pakistan, and Bengali was spoken in East Pakistan. The demand for Bengali as the national language arose and created cleavages. The framers of the Constitution cannot simply ignore it. Instead of solving the issue, they started postponing it, which came to haunt Pakistan later, and the rest is history.

Pakistan is a country full of diversity and is home to many ethnicities. After the decline of the Muslim League, these ethnic groups took Pakistan to a multi-party system. In the name of political pluralism, these parties started serving as mouthpieces for ethnic movements. In the wake of the clash of ideas between the East and West wings of Pakistan, another tussle for dominance between provinces started. In this struggle for dominance, neither the provinces nor the wings were ready to accept the parity-based representation in the constitution. This was one of the leading reasons for the failure of the first report. The constituent assembly and basic report committee were stuck in the continuous struggle of fulfilling the demands of each province and wing, but it seemed quite impossible. Pakistani politics was dominated by feudal lords and agrarian elites. They fueled constitutional and political instabilities to avail themselves of opportunities. Moreover, they wanted to protect their clientele relationship.

Liaquat Ali Khan proposed a bill delegating the power enjoyed by the viceroy of dismissing the provincial government to the federal government in July 1948. This section is 92-A. Later, he used this power to dismiss Punjab’s provincial government. This section became the bone of contention between the federation and provinces. It marked the beginning of the tussle between provinces and the center. The politicians amended the 1935 Act according to their needs and delegated themselves more authoritative power.

Khawaja Nizam-ud-din and Ghulam Ali, the former governors general of Pakistan, both belonged to the Indian Civil Services. Both were trained to work in the British colonial administration, also known as the “British Steel Frame.” Shuja Nawaz, in his book “Cross Swords: Pakistan, its Army, and the War Within,” noted that “the Muslim League was facing its own infighting and ceded the work on the constitution to bureaucrats who gained an ascendant position in the hierarchy.” The bureaucracy was only familiar with colonial 1935 Act authoritative norms and did not feel the dire need to formulate a democratic constitution. Hence, the bureaucracy delayed the constitution-making process.

The federal basis of the future constitution was agreed upon in the form of the “Objectives Resolution,”  but the model of division of powers between the central and provincial governments has led to many disputes. The two reports submitted by the Basic Principles Committees were contradictory; one offended East Pakistani politicians, while the latter was not acceptable, especially to those from West Pakistan Punjab. At the same time, while politicians from East Pakistan insisted on ensuring maximum provincial autonomy, the latter wanted a strong central government.

Pakistan was physically divided into two separate parts with a distance of approximately a thousand miles in between. A difficult problem was the quantitative representation between the two wings of Pakistan. It was necessary to ensure the representation of each unit according to its population and, at the same time, ensure proper guarantees of protection of the rights and interests of minority provinces from the dominion of the great provinces. This was difficult to resolve, but after the creation of one unit of West Pakistan and the amalgamation of all provinces, This problem was solved. Finally, parity representation in East and West Pakistan was provided in a unicameral legislature.

At the end of this discussion, we can conclude that the political conditions of post-Independent East Pakistan reflected a constitutional loophole where several political stakeholders tried to impose their desired goals and ideologies on others. This situation further worsened for the ruling elites, who wanted to justify their illegal actions to derail the political process. These moves undoubtedly created an environment of political instability, economic deprivation, and social unrest. The suspension of the political process drew criticism from certain quarters, particularly from East Pakistan. The principle of parity caused great resentment there; most East Pakistanis believed that their numerical strength was weakened by the parity proposal. The uncompromising political behavior of the ruling elites has immensely hampered the progress of political culture in Pakistan. Unfortunately, constitutionalism did not support the party concerned at this stage, and the vacuum of high-caliber leadership to address the situation resulted in an unprecedented wave of political and constitutional disintegration in Pakistan.